Karlsruhe (GER) — German-based joimax®, the market leader in technologies and training methods for full-endoscopic and minimally invasive spinal surgery, is excited to announce a major spike in attendance at its Endoscopic Spine Academy (ESPINEA®) workshops, which contributes to sustainable growth after another year of record revenues in 2021.

The growing interest can be attributed to increased coverage in literature and publications as cited on PubMed®. Moreover, the joimax®-initiated workshop program, now under the umbrella of ESPINEA®, offers optimal training for a variety of applications and procedures, making it attractive to a broader audience.

joimax® established ESPINEA® three years ago. In Fall 2020, the Endoscopic Spine Academy was accredited by the Royal College of Surgeons Edinburgh (RCSEd). It is one of only four Accreditation Centers that meet its strict rigorous internal quality assurance processes. Together, with its growing team of faculty, joimax® developed the complete six-step curriculum to bridge the learning curve for spine surgeons. The curriculum, which was approved by the RCSEd, is developed as an educational program from beginners to masters alike.

In addition to holding ESPINEA® courses at the joimax®-owned premises in Karlsruhe (Germany) and Irvine (USA), they are also held at ORSI Academy (Belgium) and at other prestigious universities, such as Paracelsus Medical University Salzburg (Austria). Recently, ESPINEA® was rolled out in Thailand. Prior to the July PASMISS Meeting, the courses will be launched in Singapore for the APAC region, and following the October SMISS Meeting, launched widely in the U.S.

With the ESPINEA® courses, surgeons can train on different procedures using the joimax® TESSYS®, iLESSYS®, CESSYS®, MultiZYTE®, EndoLIF®, Percusys® based on the latest NAVENTO® tower. Most of the courses are conducted in a hybrid mode — online and on-site presentations and lectures combined with in-person hands-on training using models, simulators and anatomical specimens.

ESPINEA® was established as an open education platform for other players in the field of spinal surgery as well. Therefore, further supporters have already joined and new entrants are welcomed.

About joimax®
Founded in Karlsruhe, Germany in 2001, joimax® is the leading developer and marketer of complete systems for full-endoscopic and minimally invasive spinal surgery. With the Endoscopic Surgical Systems TESSYS® (transforaminal), iLESSYS® (interlaminar), and CESSYS® (cervical) for decompression procedures, MultiZYTE® for facet and sacroiliac joint pain treatment, EndoLIF® and Percusys® for minimally-invasive endoscopically assisted stabilizations, established systems are provided, addressing a whole range of indications. In procedures for herniated disc, stenosis, pain therapy, or spinal stabilization treatment, surgeons utilize joimax® technologies to operate through small incisions under local or full anesthesia, via tissue and muscle-sparing corridors, and through natural openings in the spinal canal, e.g., the intervertebral foramen, the so-called “Kambin triangle”. 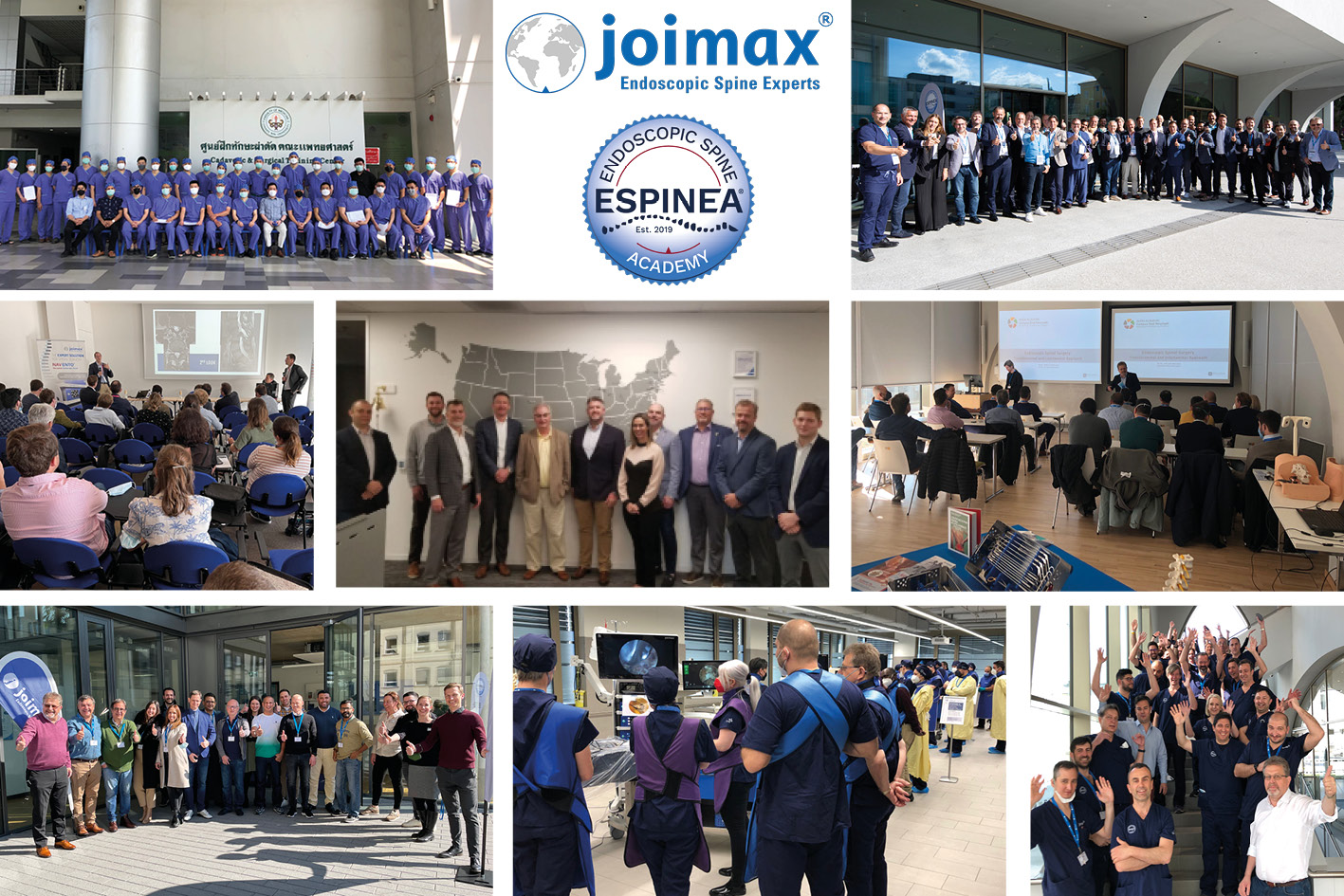